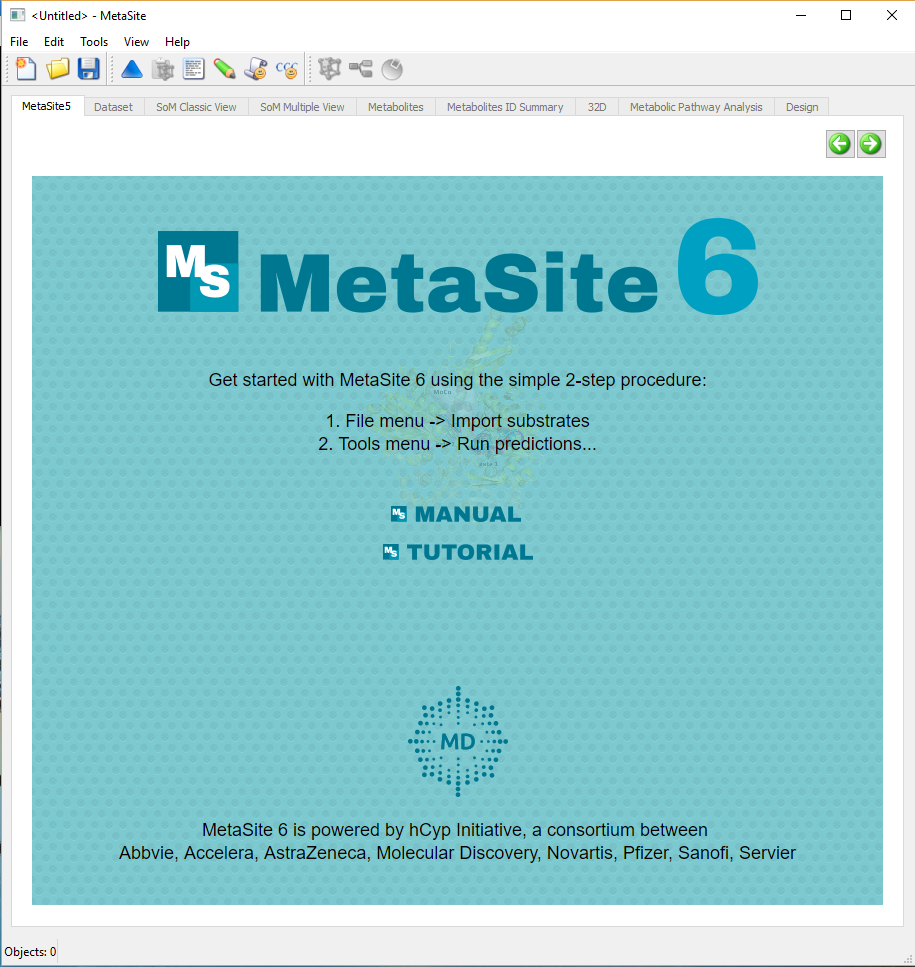 MetaSite is a computational procedure that predicts metabolic transformations related to cytochrome and flavin-containing monooxygenase mediated reactions in phase I metabolism. The MetaSite algorithm is unique in being the only software that is not training set dependent, and therefore exhibits improved predictive performance for novel pharmaceutical compounds.

MetaSite considers both enzyme-substrate recognition, which is a thermodynamic factor, and the chemical transformations induced by the enzyme, which is a kinetic factor. The MetaSite flowchart was recently improved by experimental information from the Human CYP Consortium Initiative, a joint venture between pharmaceutical companies and Molecular Discovery, working together to solve the most important issues in drug metabolism (for further information on CYP Consortium Initiative, see this page). MetaSite gives unprecedented prediction performance, and has now been updated to include the major FMO isoform (FMO3). Key features include the automatic suggestion of fragment modification to optimize specific metabolic issues (MetaDesign), and an interaction map of the substrate with the enzyme cavity (32D) to aid optimisation in the context of the enzyme.

Validation of MetaSite in CYP-Consortium data and in more than forty pharmaceutical companies has shown that the primary site of metabolism was found within the top three MetaSite predictions for more than 90% of the cases.
In addition, MetaSite provides the structure of the metabolites formed with a ranking derived from the site of metabolism predictions. The method also highlights the molecular moieties that help to direct the molecule in the cytochrome cavity such that the site of metabolism is in proximity to the catalytic centre.
Directly blocking the primary site of metabolism can risk creating an inhibitor of the cytochrome, or may negatively affect the activity or selectivity of the compound towards its therapeutic target. Modifying these contributing moieties that most influence the site of metabolism can bypass both of these potential problems.
For the MetaDesign module, download pre-computed database fragments here. Uncompress the downloaded files and select them when using the MetaDesign module.

Aldehyde oxidase (AOX) is a molibdo-flavoenzyme that raised great interest in recent years, since its contribution in xenobiotics metabolism has not always been identified before clinical trials, with consequent negative effects on the fate of new potential drugs. The fundamental role of AOX in metabolizing xenobiotics is also due to the attempt of medicinal chemists to stabilize candidates toward cytochrome P450 activity, which increases the risk for new compounds to be susceptible to AOX nucleophile attack.

Therefore, novel strategies to predict the potential liability of new entities towards AOX enzyme are urgently needed to increase effectiveness, reduce costs, and prioritize experimental studies. In the present software implementation, we present the most up-to-date computational method to predict liability towards human AOX, for applications in drug design and pharmacokinetic optimization. The method was developed using a large dataset of homogeneous experimental data, which is also disclosed as supplementary material.

The model combines the knowledge acquired from both experimental and in silico sources. Indeed, more than 600 compounds (acquired or synthesized to meet the needs of assessing structure-activity relationships) were experimentally tested in human liver cytosol (HLC) to generate the largest database of homogeneous experimental data publicly available so far. Applied in an early phase, the method should facilitate a good understanding of the passivity of AOX-catalyzed metabolism and suggest potential modifications to increase the stability of a xenobiote to AOX-catalyzed reactions.

When other factors are constant, an electrophilicity scale can be used to estimate the likelihood that a chemical group suffers a nucleophilic attack by AOX enzymes. In MetaSite electrophilicity in water is now fast estimated by semiempirical calculation energy of a chemical moiety.